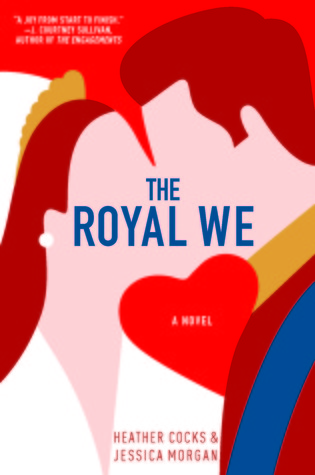 “I might be Cinderella today, but I dread who they’ll think I am tomorrow. I guess it depends on what I do next.”

American Rebecca Porter was never one for fairy tales. Her twin sister, Lacey, has always been the romantic who fantasized about glamour and royalty, fame and fortune. Yet it’s Bex who seeks adventure at Oxford and finds herself living down the hall from Prince Nicholas, Great Britain’s future king. And when Bex can’t resist falling for Nick, the person behind the prince, it propels her into a world she did not expect to inhabit, under a spotlight she is not prepared to face.

Dating Nick immerses Bex in ritzy society, dazzling ski trips, and dinners at Kensington Palace with him and his charming, troublesome brother, Freddie. But the relationship also comes with unimaginable baggage: hysterical tabloids, Nick’s sparkling and far more suitable ex-girlfriends, and a royal family whose private life is much thornier and more tragic than anyone on the outside knows. The pressures are almost too much to bear, as Bex struggles to reconcile the man she loves with the monarch he’s fated to become.

Which is how she gets into trouble.

Now, on the eve of the wedding of the century, Bex is faced with whether everything she’s sacrificed for love-her career, her home, her family, maybe even herself-will have been for nothing.

The Royal We by Heather Cocks and Jessica Morgan – Book Review

It was clear to me the moment I read the synopsis that it’s their take of Prince William and Kate Middleton story. Normal girl meets a prince in University. The setting of the story is definitely something that a lot of girls have dreamed about. Also, how normal Bex is make her a very relatable character.

The story really begins when the two have graduated university and had to navigate their relationship through different circumstances. The fact that Nick is a Prince makes everything even harder. I felt bad for Bex every time Nick tried to hide her from the public and even his own family. I understand that he did it for Bex’s own good, but I wish Nick would ask how Bex feels about it.

The theme in the story is not about will they end up together, because I know they will. It focuses more on whether they can stay together; facing every challenge that come their way, which I find rare in books. Some troubles that they went through were too frustrating for me that I had stop reading for a while and then continue again. I have no problem with the rest of their love story though. The little moments between the two are sweet and lovely that you couldn’t help but to root for them. Even though there are certain things about their relationship that need work (like the two need to have more conversation with each other. You’ll find often times that Bex is hiding her true feelings from Nick and I don’t think that’s right. In fact, it was weird to me how Bex could have all the important conversation with Nick’s brother, Freddie, but not with her own fiancée)

One issue I have the book is the ending. Maybe it’s just me, but it felt rushed to me. The sudden focus on what Bex’s friends (or ex-friends) came out of nowhere. Also, I wasn’t fully sure that Nick has TOTALLY forgiven Bex for something she did. I wish there was more focus on that. I would love to see how the two fix their relationship in regards to that. I personally am not satisfied with the ending. I want to the aftermath; whether the two REALLY have their happy ever after. I also wish that the book had Nick’s POV because I really want to know what actually goes on his mind.

Overall, the book is very enjoyable read. I genuinely laugh at certain parts because the authors are hilarious. If you like royal romance, I think you’d like this book.