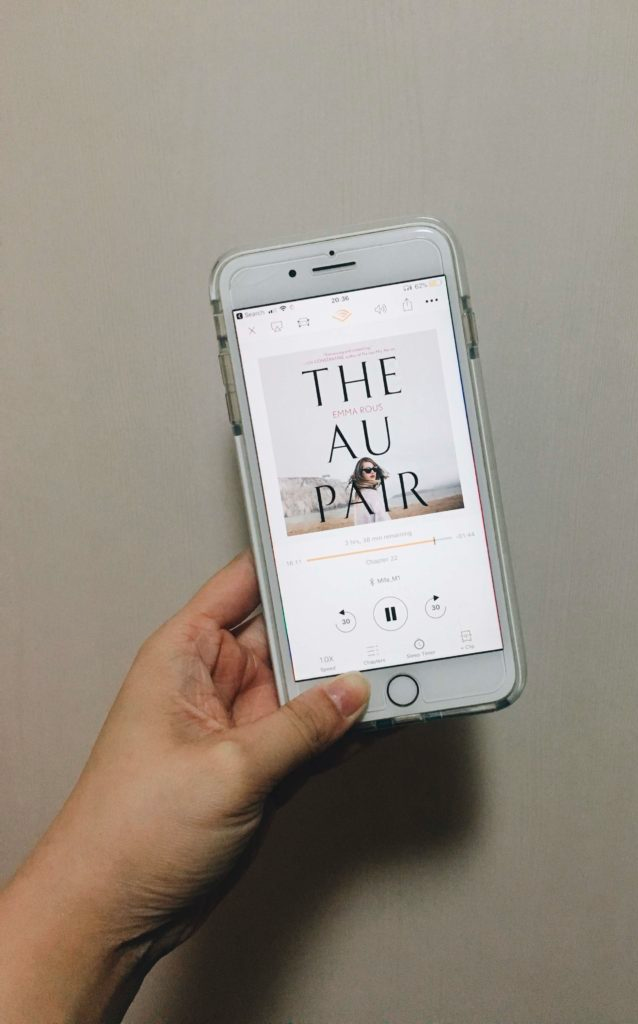 I was scrolling through Audible when I came across The Au Pair. I decided to pick this one without reading any review so I really had no idea what to expect. The narration of this book is amazing. From the moment it started, I was hooked. The book opened with Seraphine and you could hear the curiosity and anxiety in the narrator’s voice. The mystery was brought to you right at the beginning of the book. Who is Seraphine?

To give a little bit of background, Seraphine Mayes just lost her father. While she was clearing her father’s office, she found a photo of her parents, her brother Edwin, and a baby. This picture piqued her curiousity; where is her twin brother, Danny? Seraphine had doubts now. Did her parents really only have one child? Is she not her parents’ daughter? The problem is, she couldn’t ask anyone her mum died the summer she and her twin brother were born.

Seraphine decided to get to the bottom of this by contacting Laura, an au-pair who used to work for her parents during that summer. However, contacting Laura wasn’t the easiest. Somehow, there are people who didn’t want Seraphine to meet Laura.

The book was divided into two POVs. One is Seraphine’s, the other one is Laura’s. In Laura’s POV, we were brought back to the summer of 1992, when she worked for the Mayes family. In her POVs, we learned about the relationships between Laura, Dominic and Ruth Mayes, and a friend of the Mayes, Alex. Ultimately, the question becomes what really happened in the summer of 1992?

The Au Pair is Not That Simple

Since I listen to the audiobook, I don’t know how the reading experience would be. However, the narration in this audiobook will make you curious. You just want to know what happened.

To me, the storyline of The Au Pair is layered. While the ultimate question might be what really happened in the summer of 1992, there are more secrets than you probably imagined. Some of it were really easy to guess, but nevertheless, it was still something that to me adds more to the story. It helped you understand why things were the way they were. I don’t think I can say much without spoiling the story but I have to say that these little secrets make the story more interesting.

If you’ve read my other reviews, you’d know that I enjoyed multiple POVs in books. They often add great layers to the story. As a naturally curious person, reading multiple POVs quench my thirst for knowledge – of what each character is thinking and their own thoughts on the unfolding stories.

In The Au Pair, the POV between Seraphine and Laura flowed really well. The whole time I was listening to the book, I felt like I was being pushed back and forth; between the past and the present but somehow the story meets right in the middle effortlessly. Overall, it was an enjoyable listening experience!

I have to say that I didn’t get my mystery/thriller fix with The Au Pair. It has good drama if you are into them, but as someone who initially picked this book because it was categorized as mystery/thriller, I was disappointed. I wish there were more mystery aspect to it, but a lot of the secrets were not surprising and easy to guess – at least to me. So, if you were thinking of picking up The Au Pair for the mystery, you might want to think again.

The Au Pair by Emma Rous

Seraphine Mayes and her twin brother Danny were born in the middle of summer at their family’s estate on the Norfolk coast. Within hours of their birth, their mother threw herself from the cliffs, the au pair fled, and the village thrilled with whispers of dark cloaks, changelings, and the aloof couple who drew a young nanny into their inner circle.

Now an adult, Seraphine mourns the recent death of her father. While going through his belongings, she uncovers a family photograph that raises dangerous questions. It was taken on the day the twins were born, and in the photo, their mother, surrounded by her husband and her young son, is beautifully dressed, smiling serenely, and holding just one baby.

Who is the child and what really happened that day?

One person knows the truth, if only Seraphine can find her.